The majority of continental crust formed during the hotter Archean was composed of Tonalite-Trondhjemite-Granodiorite (TTG) rocks. In contrast to the present-day loci of crust formation around subduction zones and intra-plate tectonic settings, TTGs are formed when hydrated basalt melts at garnet-amphibolite, granulite or eclogite facies conditions. Generating continental crust requires a two step differentiation process. Basaltic magma is extracted from the pyrolytic mantle, is hydrated, and then partially melts to form continental crust. In this project, we parametrised the melt production and melt extraction processes and showed self-consistent generation of primordial continental crust using evolutionary thermochemical mantle convection models. To study the growth of TTG and the geodynamic regime of early Earth, we systematically varied the ratio of intrusive (plutonic) and eruptive (volcanic) magmatism, initial core temperature, and internal friction coefficient. As the amount of TTG that can be extracted from the basalt (or basalt-to-TTG production efficiency) is not known, we also tested two different values in our simulations, thereby limiting TTG mass to 10% or 50% of basalt mass. For simulations with lower basalt-to-TTG production efficiency, the volume of TTG crust produced is in agreement with net crustal growth models but overall crustal (basaltic and TTG) composition stays more mafic than expected from geochemical data. With higher production efficiency, abundant TTG crust is produced, with a production rate far exceeding typical net crustal growth models but the felsic to mafic crustal ratio follows the expected trend. These modelling results indicate that (i) early Earth exhibited a ''plutonic squishy lid'' or vertical-tectonics geodynamic regime, (ii) present-day slab-driven subduction was not necessary for the production of early continental crust, and (iii) the Archean Earth was dominated by intrusive magmatism as opposed to ''heat-pipe'' eruptive magmatism. 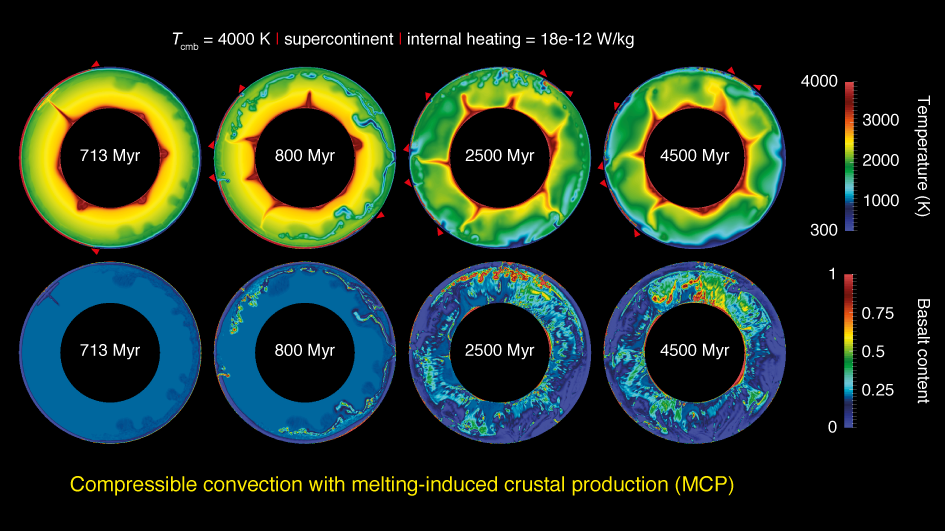 Continents influence the mantle's convective wavelength and the heat flow escaping from the planet's surface. Over the last few decades, many numerical and analytical studies have contributed to the debate about whether the continents can warm up the subcontinental mantle or not and if they do, then to what extent? However, a consensus regarding the exact nature and magnitude of this correlation between continents and elevated temperatures in the subcontinental mantle remains to be achieved. By conducting a systematic parameter study using 2D global mantle convection simulations with mobile continents, we provided qualitative and quantitative observations on the nature of this correlation. In our incompressible and compressible convection models, we observed the general processes of downwellings bringing cold material into the mantle along continental margins and a subsequent buildup of warm thermal anomalies underneath the continents. We computed the amplitude and degree of this correlation using spectral decomposition of the temperature and composition fields. The dominant degree of correlation evolves with time and changes with continental configuration. Using simple empirical fits, we observed that this correlation decreases with increasing core temperature, number of continents, internal heating, or decreasing reference viscosity. We also reported simple regressions of the time-dependence of this correlation. Additionally, we showed that decompression melting as a result of a mantle upwelling or small-scale sublithospheric convection leads to voluminous volcanism. The emplacement of this dense basalt-eclogite material breaks the continents apart and destroys the correlation.

The results are published as: Jain, C., Rozel, A., and Tackley P. J. (2019) Quantifying the correlation between mobile continents and elevated temperatures in the subcontinental mantle. Geochemistry, Geophysics, Geosystems, 20

Role of Plutonism during early Earth